City dwellers change their living conditions radically only when they are on vacation. But over time, they understand: hotels, even in different countries, for the most part, are similar to each other. However, there are special ones. And spending the night in one of these is an adventure in itself

This would be an ordinary resort hotel on the seashore, if not for one room&nbsp ;- houseboat with an underwater room. Underwater Room is located 250 m from the shore. On the deck of an exotic design, you can sunbathe with a cocktail in your hand during the day or look at the stars at night, also with a cocktail (all inclusive).

The huge windows of the underwater bedroom provide an all-round view: you can observe the life of reef fish, squid and octopuses, realizing that you can swim with them at any time. This hotel is the project of the Swedish company Genberg Underwater Hotels, which creates underwater apartments around the world. 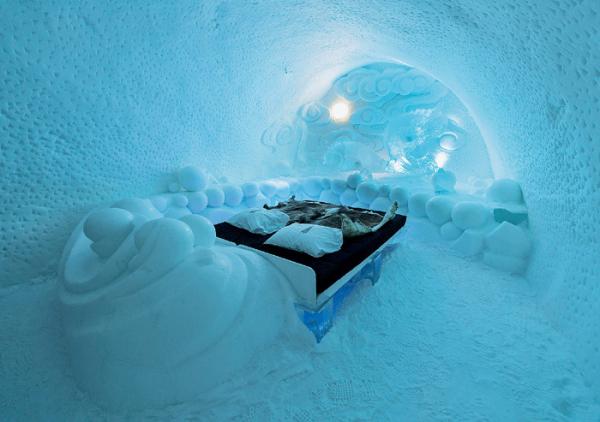 This snow and ice art project has been running since 1989. Every winter the hotel premises are rebuilt in a new way. The material is the frozen water of the unique Tourne Elv River, which has never been used for industrial purposes. Every spring, the ice melts, so the rooms are not the same from year to year – always different walls, decor and furniture. Visitors are given thermal underwear, hats and sleeping bags. After a night on reindeer skins, guests are served breakfast with hot lingonberry juice. No matter how cold it is outside, the rooms are never colder than -7 °C. 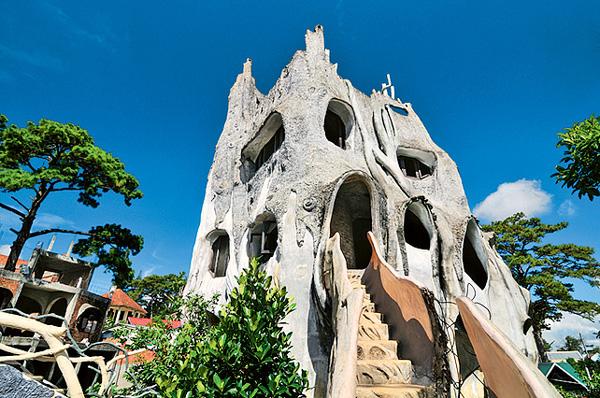 Guest house Hang Nga, or, as it is more commonly called, the “Crazy House”, resembles a huge bizarre tree. Not a single corner – all the walls are rounded, the ladders are twisted in a spiral or thrown from one building to another. It is a mix of Gaudí style fantasy, Alice in Wonderland and Russian folk tales. At night, guests sleep in the rooms, and during the day, sightseers “travel” along the tree.

One of the highest mountain hotels in the world (3912 m) is located on the southern slope of Elbrus. Guest modules resemble spacecraft capsules. Bedrooms are designed for 12-18 people, there is a wardroom. In the technical room there are comfortable toilets and showers. All energy comes from solar panels. 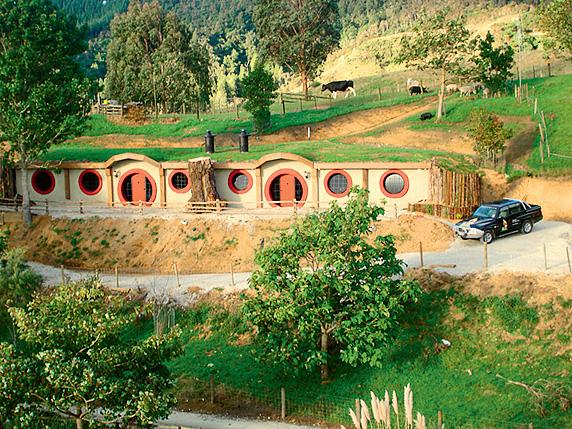 Nestled among green farmland, the motel offers four types of accommodation: in a 1918 train car, inside a Vietnam War combat aircraft, in a World War II patrol boat, and, finally, underground  “hobby burrows” (pictured). All rooms are equipped with a kitchen, toilet and shower. 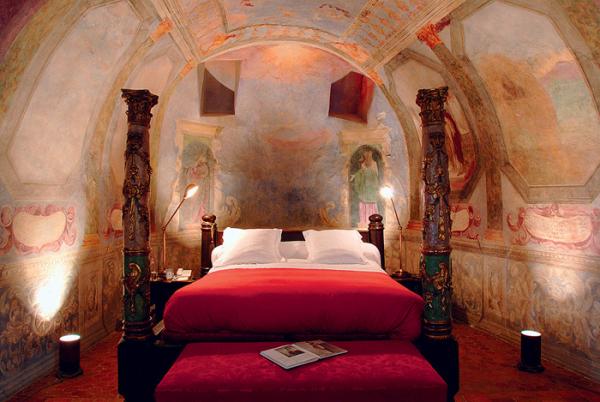 Considered by many in France to be a masterpiece of Romanesque architecture, this historic monument was turned into a luxury hotel in its ninth century. Powerful walls with observation towers are surrounded by a moat, the windows overlook the French garden and Beaujolais vineyards. Interiors with wall frescoes and antique furniture are designed by the designers of the best fashion houses in France. 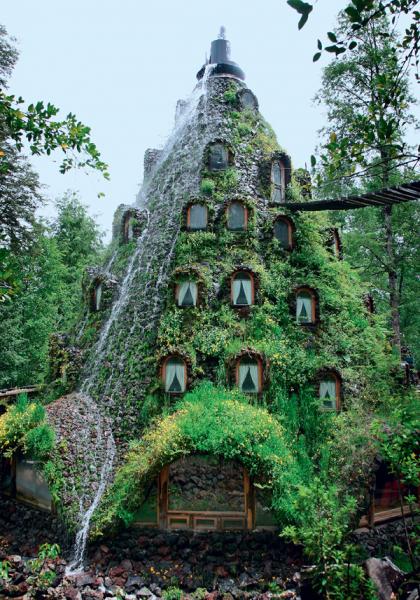 The magical mountain house was built in the Huilo Huilo Biological Reserve. Externally, the hotel looks like a volcano, overgrown with lush vegetation and constantly spewing water instead of lava. If it were not for the window openings in several tiers, then the conical structure would look like part of a forest landscape.

The “monkey” suspension bridge at the level of the middle part of the structure is the only way to get inside. Some windows offer a view of the real volcano Mocho-Choshu-Enko. The rooms are equipped with bathtubs carved from a single piece of wood. 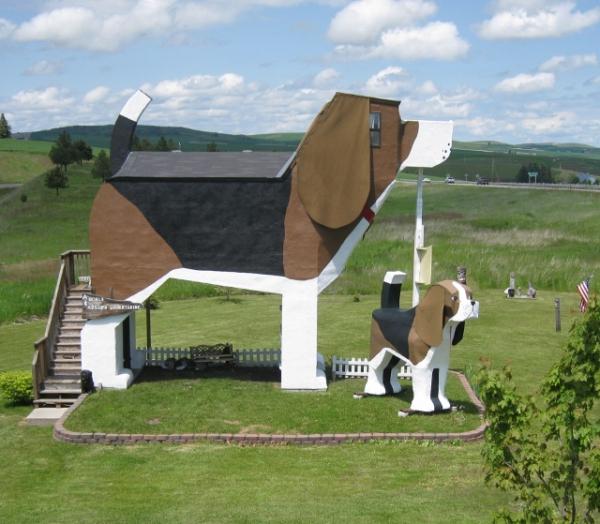 A 10-meter beagle dog made of plywood and drywall is called Sweet Willy. The rooms are located in her stomach. The authors of the project are a married couple of artists, wood carvers. 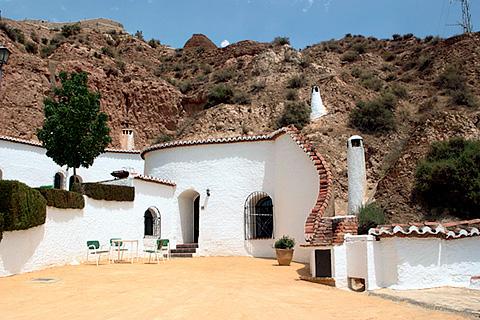 In the 15th century, the Moors hid from the Spaniards in these caves. Today there are 23 cozy rooms. Regardless of the season, the temperature inside is comfortable: 18–20 °C.

The hotel in the caves of Cappadocia is, in fact, a “residential museum”. Each of the 30 rooms is decorated with valuable and in some cases priceless antiques from Hittite, Roman, Seljuk and Ottoman times.

Spending the night in a pine forest, lying on the grass and watching the starry sky, is happiness available to everyone. That's just dampness and insects & nbsp; – mandatory attributes of such an overnight stay. Rest in the “tent camp” in Montagnac-Monpeza is devoid of such shortcomings. Here, guests enjoy life in bubbles made of a transparent elastic material that blocks UV during the day and protects against insects and dampness at night.

Grass floor and telescope are nice additions to comfort. The shape of the bubbles is maintained by fresh air supplied by a small silent device. Cylindrical corridors lead inside the rooms. At the end of the season, the bubbles are blown away.

Those who are lucky enough to spend a couple of nights in this hotel call it at least a cradle for birds. There are only three guest rooms. These are wooden spheres suspended from trees. Each sphere is equipped with a refrigerator and built-in speakers so you can stock up on snacks and hang between the trees to the music. Amenities & nbsp; – in the form of composting and traditional toilets, as well as showers and saunas – on the street. The guests are delighted.

In the mirror cube, attached to the trees in the wilderness, everything that surrounds it is reflected: the wilderness, the clearing and the sky, so the human eye will not immediately notice the 4x4x4 m structure. And so that the birds do not crash, the cube is “wrapped” with an infrared film, which birds, unlike people, see. The entire interior is made of birch plywood.

In addition to the bedroom for two, there is a living room, a bathroom and even a rooftop terrace. The hotel has other amazing apartments: in the form of a UFO, a bird's nest or a dragonfly. For the convenience of guests, a sauna for eight people has been built on one of the trees.

The “pleasure haven” for the conquerors of Mont Blanc is located at an altitude of 3835 m. The futuristic egg-shaped building with four floors for 120 people is equipped according to the highest environmental standards.

An hour from Mexico City, 20 hotel rooms are nestled inside sewers. Each room has electricity, a window with curtains and a luggage compartment under the bed.

They differ from the authentic Lapland huts by increased comfort. 20 modern “igloos” are made of thermal glass, through which you can admire the northern lights. 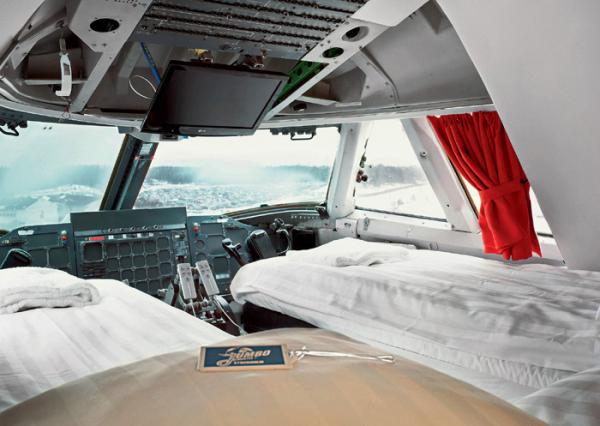 Boeing 747–212B (Jumbo Jet), which belonged to a Swedish company that went bankrupt in 2002, was converted into a hostel in 2008 and placed at the entrance to Stockholm Arlanda Airport. The interior was completely dismantled, the interior was disinfected. It was equipped with 29 rooms. The area of ​​a standard room is 6 m2. The most expensive and spacious is located in the cockpit. There is even a toilet there. For the rest of the guests there are conveniences in the corridor.

From the cockpit there is a panoramic view of the airport, from ordinary rooms – a view of the runway. Each room has a TV, you can follow the flight schedule. The hotel has a cafe and a souvenir shop. 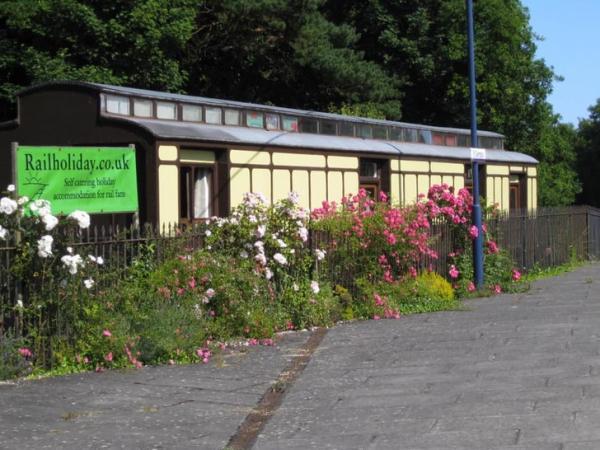 The hotel owns four restored railway cars, allowing you to travel through different times and styles, starting from the 19th century. 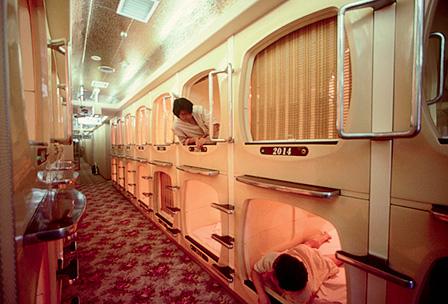 “Capsule” hotel, reminiscent of a submarine or spaceship. The rooms are “minks” sized 2x1x1 m. The Japanese call them “coffins of improved layout”. 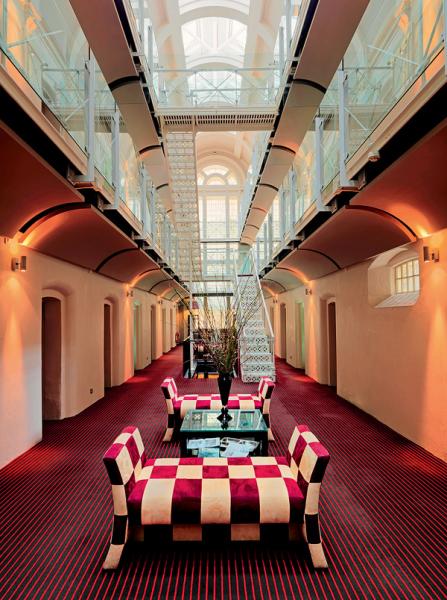 The hotel is located in the building of the former royal prison of the 11th century, which was bought by the hotel in 2005 Malmaison network. The gratings, barbed wire fences and the general environment still remind of the institution's prison past. True, the one who got here does not want to run away, unless he grabs exclusive toiletries from comfortable “cameras”. Rooms are furnished with designer furniture, and a restaurant and a beer bar are located on the site of the former office. 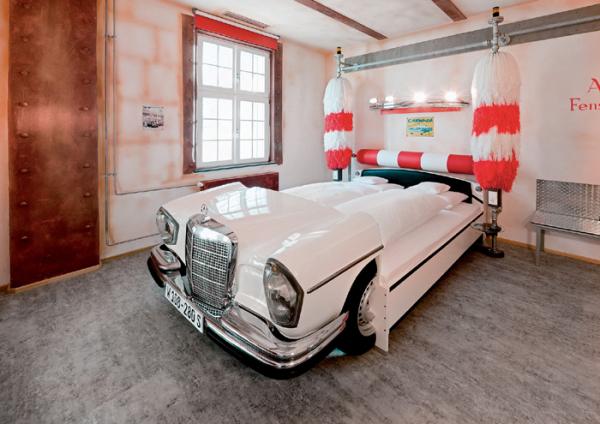 Hotel for car lovers. Both the architecture of the building and the design are dominated by the corresponding theme. In the design of the rooms, elements and spare parts of cars, as well as rare vehicles as a whole, are used. You can sleep on a Cadillac bed, hide in a garage bedroom, lounge on a sofa-hood, spend the night at a “car wash” – in one of 10 themed rooms. In addition, the hotel offers body-tuning at the massage parlour, and a good gas station at the local gastronomic restaurant. 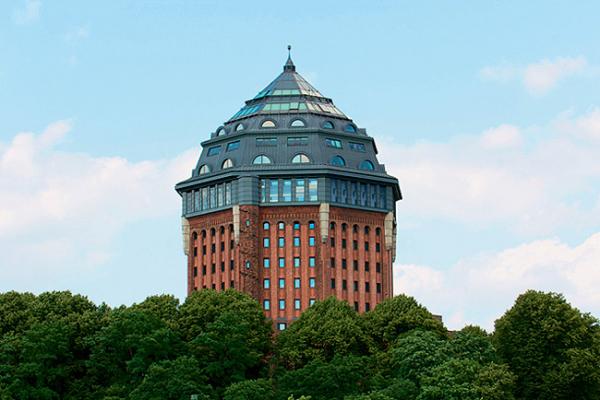 The modern hotel is built into a water tower built in the 19th century in the Sternschanze park. To justify the functional purpose of the building, the hotel has a sauna complex and a hydromassage shower. On 16 floors of the tower there are 226 rooms with city or park views. The suite on the top floor offers a panoramic view of Hamburg. 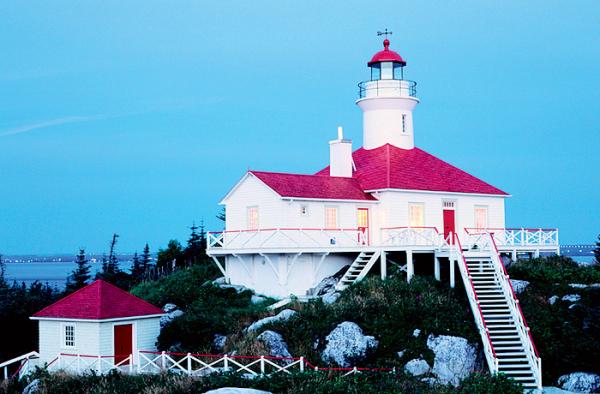 The lighthouse, set in 1862 on the St. Lawrence River, was abandoned after 100 years, and in 1989 it was revived as a hotel. This architectural monument of federal significance has only three double rooms and a common living room, which are decorated in the spirit of the last century. You can watch birds through the telescope on the tower. 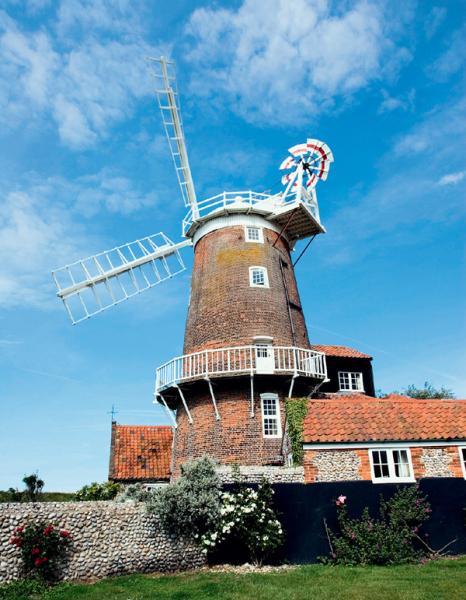 The windmill, built in the early 18th century, survived a lot, including the filming of The Conspirator with Elizabeth Taylor in 1949 and the flood in 1953. Today's owners have converted it into a hotel. Comfortable rooms are available not only in the mill itself, but also in the former stables and dovecote. 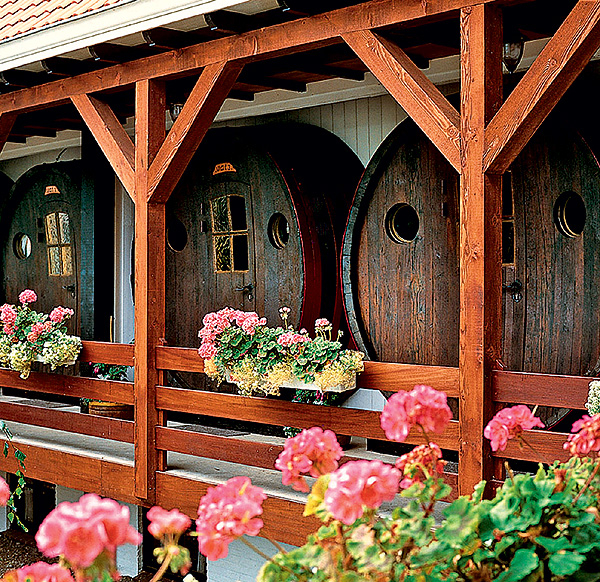 The hotel is located in the harbor of the Dutch city of Stavoren, but more than a view of the yachts, guests are attracted by four rooms – in Swiss wine barrels. The capacity of each is 14,500 liters. They say that a light wine smell makes itself felt.

Material published in the magazine “Vokrug sveta” No. 6, June 2014, partially updated in March 2022