A brief history of lard: who and in what country came up with salting it (and 4 recipes with lard)

Long before the advent of modern dietary science that declared war on “bad” cholesterol, food was valued in many parts of the world for its fat content and nutritional value. Pork fat gave these irreplaceable properties to national dishes

It is difficult to say exactly when this valuable nutrient began to be used as food, but it is known that man domesticated the pig around 10,000 BC. e in Central Asia. From there, the animal came to China, and then to Europe and Africa. It turned out to be easy to breed pigs, besides, not only meat, but also animal fat was used for food. Moreover, they used both subcutaneous fat, and interior kidney fat, and meat with wide streaks of fat. 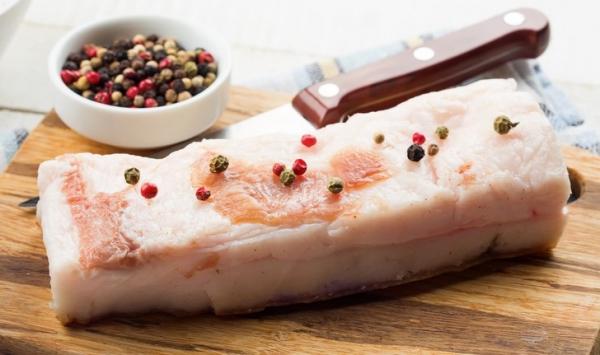 Subcutaneous fat from the peritoneum could be boiled, salted, smoked, added to sausages and sausages, thus providing food for oneself in the cold autumn and winter months. The interior fat was melted and used for frying and baking. It is believed that the best lard is obtained from a one and a half year old pig.

In Russia, lard, as a rule, was salted in barrels or stored melted in pots, used to make soups, cereals, pancakes. It was also used for preserving not only meat, but also, for example, when harvesting spinach. It was mashed and poured with lard.

The Italians call lard – lardo, they prepare it in Tuscany and in the north of the country. Salted with rosemary and herbs. The tradition of harvesting lard has been preserved in Italy since ancient Rome. The Romans called lard petaso (petaso) and ate it with figs. The Italians, who love to protect the authenticity of their food, have included the Tuscan lardo di colonnata in the list of foods protected by origin.

< p>This is what the famous gourmet Grimaud de la Renière wrote: “The pig is the queen of unclean creatures, and her power is the most universal, and her virtues are the least controversial: without a pig there is no fat, and without fat it is impossible to cook a single dish“.

In the Middle Ages, a piece of bread with bacon, which the French call lard, was quite a common snack. Lard and lard are still added today to soups, poultry and rabbit dishes, they are smeared with crepes.

Lard was widely used in medieval English cuisine, it is absolutely necessary, for example, when preparing Christmas pudding according to the traditional recipe.

But in England, as well as in the USA, bacon has won great love – meat penetrated with layers of fat. It is hard to imagine a traditional English breakfast without bacon.

In Russia and Ukraine, lard is surrounded by a lot of funny stories and expressions, in England they relate to bacon. For example, there is an expression bring home the bacon. Literally translated, it means “bring home the bacon.” It is connected with a custom that arose in the 12th century in the British town of Dunmow to strengthen marriage ties. The local church awarded a piece of bacon to a man who could swear before God and the parish that he had never quarreled with his wife for a year and one day.

You can argue endlessly about the dangers and benefits of fat for health. Pork fat is considered a heavy food to digest and its consumption has been associated with the development of atherosclerosis. Not so long ago, there was good news for fat lovers. They found vitamins A, E and D, and most importantly, arachidonic acid. This polyunsaturated fatty acid helps the brain and heart function properly, so lard consumption in limited quantities (25-30 g per day) is even considered beneficial for health.

4 recipes with lard from chefs*

For the hollandaise sauce

Beat the yolks with salt and vinegar in a water bath until airy. Add warm ghee, then white wine and finally chopped tarragon.

Cut the bacon into large cubes, fry and add the spinach.

Cook the poached egg. Cut the crust from the roll, cut in half, soak in milk, and then in a beaten egg and fry.

Drizzle half a bun with hollandaise sauce, top with fried bacon and spinach, then a poached egg. Decorate with watercress. Drizzle with olive oil at the end.

Fry the duck leg in a pan until golden brown. Fry vegetables in the same fat. Add a bouquet of thyme and bay leaf garni, broth, melted lard, soy sauce. Transfer to a refractory form, cover it with foil and put in the oven, heated to 180 ºС for four hours.

For garnish, boil the lentils with garlic, thyme, shallots, and then fry in olive and butter , adding white wine and chicken broth when frying.

Boil Kenyan beans in salted water. Glaze with the addition of butter and chicken broth, add mint and orange zest at the end.

For the sauce, reduce the port wine by half, and then mix with the demi-glace sauce.

Put the beans, lentils and duck leg on a plate, pour over the prepared sauce and garnish with herbs.

Khinkali from Izo Zandzawa, chef of the Spices and Joy restaurant

Pass green pepper, onion and garlic through a meat grinder. Mix the resulting mass well. Add spices. Minced meat diluted with cold boiled water. Add as much as the meat can absorb, this is how the juice appears inside the khinkali.

Pour the flour onto a large flat dish, collect it in a mound, make a depression in the center, pour in cold water, add salt and knead a very tough dough. Divide the dough into pieces and roll out thin cakes. It is very important that the dough is elastic and strong so that it does not tear in the finished khinkali. Carefully put the minced meat in the middle of the circle so that it does not spill over the dough. The filling on the cake should be approximately equal to the weight of the dough. Close the khinkali with a knot, gathering the ends into small folds. An ideal khinkali should have at least 18 tucks.

Boil khinkali in salted water for 12 minutes. When the khinkali float to the surface, they are ready. Take it out carefully so as not to tear the dough, as then all the juice will flow out. Be sure to rinse with cold water before serving. Khinkali is served with allspice on the table.

Frikando meat from the hind leg

Prepare puff pastry, roll it out according to the size of a piece of veal, finger-thick, put the veal in the middle and cover with the edges of the dough; in this case, the dough should be given the shape that veal has. Cut off excess pieces of dough, pinch it and fold the roast with a pinch down on a thick dish, brush the dough with an egg, put it in a hot oven.

Once the dough is browned, reduce the heat of the stove and bake on medium heat until fully cooked for 1–2 hours.

Then take the roast out of the oven, cut it into portions with the dough and place on a dish in the form that the roast had before cutting.

To the fricando some dark, spicy sauce is served separately in a Slavic gravy boat. The fricando can be fried on all sides before being wrapped in the batter to form a beautiful golden crust.

* Chef information correct as of 2016