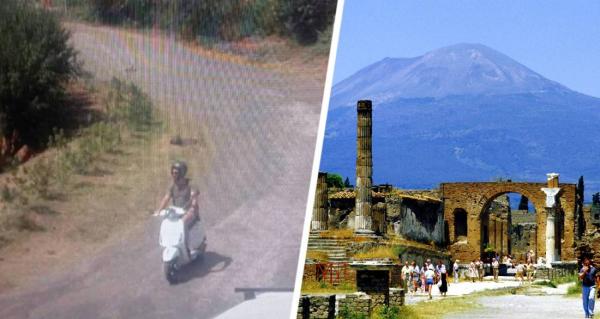 The detention scandal took place in Italy's famous 2,000-year-old landmark, the ancient city of Pompeii, buried under a layer of ash from the eruption of Mount Vesuvius in 79 AD. “Barbarian” – namely, as the local press dubbed the Australian tourist, he managed to ride a moped through the ancient ruins. The offender was detained.

The museum management explained that the 33-year-old tourist from Australia somehow managed to get through the gate used by maintenance vehicles. According to the usual rules, any tourist facilities, including scooters and mopeds, are strictly prohibited on the territory of the ancient city, which was destroyed by a volcanic eruption in 79 AD.

“There was no danger to visitors or the site at any time. The incident ended in just a few minutes thanks to the efficient patrol service of the archaeological park,” the police said.

Italian media reacted to the incident with outrage. The tourist was called a “barbarian”. Although at the same time, the tourist did not drive along historical roads and no artifacts were damaged. So far, he has been charged with “unauthorized access.” What threatens the tourist for him is not specified.

But let us remind you that tourists often behave in Italy not quite sanely, for which they pay serious fines. At the end of July, for example, a tourist had to pay a fine of 500 euros, who, in 40-degree heat, dipped his feet in the famous Trevi Fountain (read the details at the link).

Another tourist turned out to be capable of a really barbaric act – and got off with less. An American who thought to throw an electric scooter down the Spanish Steps in Rome got off with a fine of 400 euros. And besides, she is blacklisted by visitors to the famous landmark. At the same time, the repair of the historical staircase cost 26,000 euros.

However, often a tourist runs the risk of paying even more seriously for breaking the law and his own stupidity in Italy. A 23-year-old American traveler suffered an unauthorized ascent to the crater of Vesuvius. The incident came after a tourist and three of his relatives decided to bypass the official visitor entrance to the volcano and follow a prohibited route to the summit. At some point, the man lost his balance and fell down into the funnel. The carabinieri (policemen) came to the aid of the unfortunate traveler, and the emergency service provided him with medical assistance, because. the man was injured. The police then detained the hiker and his companions, along with two other visitors, on charges of taking a route that was clearly marked as very dangerous and off-limits. Read the details at the link.

For those who care about a healthy lifestyle, we recommend reading: “Doctor of Medicine told me whether it is possible to eat eggs every day.”