Since ancient times, the consecrated Easter cake, symbolizing Christ present at the festive table, has been one of the main symbols of Christian Easter 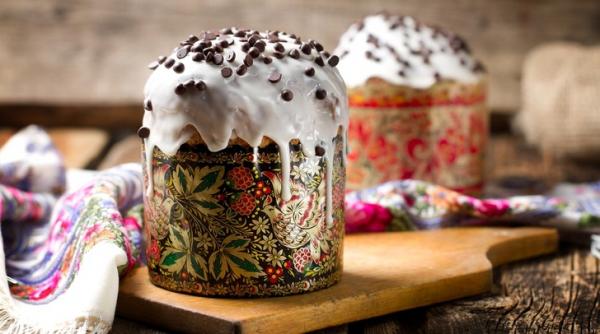 Among the Jews, yeast was considered an unclean product and often denoted the wicked. In the New Testament, on the contrary, yeast is compared with the Kingdom of Heaven: “The Kingdom of Heaven is like leaven, which a woman took and put into three measures of meal until it was all leavened” (Mt 13-33).

In pre-revolutionary Russia, in addition to Easter cakes, women and mazureks who came from Poland were served on the table. 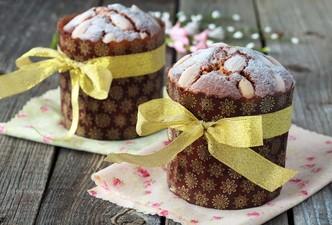 Dissolve the yeast in warmed cream and put a thick dough of 600 g of flour on them.

When the dough rises, drain the water (in which it rose), add the mashed with butter and sugar yolks, crushed cardamom, sorted, washed and dried raisins, saffron infused with vodka, crushed nutmeg, chopped candied fruits, chopped almonds and all the rest of the flour and cream.

Having beaten the dough well on the table or on the board, put it back in the pot and let it rise for 1-2 hours; put up to half the height in a tall, tin, round form, oiled and sprinkled with small breadcrumbs; let it rise in the form to the height and put it in the oven at a light temperature. 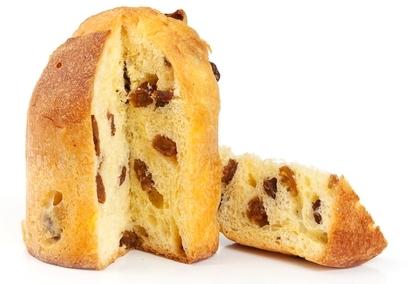 It is always better to bake small Easter cakes from such a dough, because they bake better than large ones. From this proportion, you can bake two Easter cakes. This cake is best made on the yolks alone, without whipped proteins, from the increase of which the cake soon becomes stale. If Easter cakes want to bake in the form, then the dough needs to be made a little thinner than for Easter cakes that are baked on sheets. 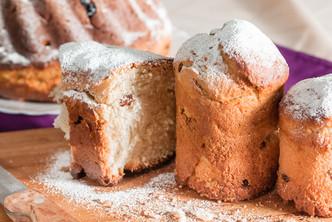 First, taking 1 glass of the best wheat flour from the whole quantity, sift it into a cup and brew 1 a glass of boiled hot cream, stir well and let cool to the warmth of fresh milk; then dilute the yeast in a glass of lukewarm cream, pour it into the brewed flour, stir and let it rise.

When the dough rises well, then put in it the yolks, sugar and butter. The yolks must first be ground with sugar and then add the butter, pounded separately until white, and put all this, already mixed together, into the dough. After that, pour all the rest of the flour into the dough, add a little salt and blue raisins, previously sorted from the twigs and washed well.

Then beat the dough well with a spatula to such an extent that it all turns into bubbles, and then put climb to a warm place.

When the dough has risen enough, then put it in a special form for a woman, but so that the dough does not reach the top of the form, because it still has to rise in the oven. The baking dish is greased with oil and sprinkled with flour or laid out with oiled paper.

Baba should be baked in a light heat, but only, of course, not in a red-hot stove. When baking a woman, one should not slam the door hard – it can fall off. The readiness of a woman is determined in the same way as the readiness of all other cookies – with a splinter.

You need to cool a woman on a pillow.

Taking the indicated amount of almonds, previously scalded and dried, grind it in the machine as finely as possible, mix with fine sugar, put 7 proteins there , stir well, put all this mass in a thick pan and boil on coals.

To do this, pour hot coals into a frying pan, put a pan on them and boil the marzipan, stirring all the time, until the mass turns white and becomes completely thick; then put it on a sheet covered with waxed paper, which must first be greased with Provence oil so that the frozen marzipan does not stick to the paper.

Putting the marzipan on paper, you need to level it with a spoon over the entire sheet was everywhere the same thickness; then, wrapping the paper in an envelope so that the martsepan is covered with paper on all sides, take it out into the cold and chill.

When the marzipan hardens well, then roll it out like dough with a rolling pin half a finger thick, give it a round shape, trim the edges and put it on a sheet covered with paper smeared with Provence oil.

Roll out the scraps of dough and make a welt and binding on marcepan, as for a sweet cake, and put in a medium oven heat. When the mazurek is reddened and baked, reduce the heat so that the cabinet is only warm, and keep it in this cabinet for some more time to dry.

Remove the finished mazurek with jam, putting several berries in each cell of the binding. Instead of jam, you can decorate martsepan with candied cherries.

Not only mazureks can be made from such marzipan dough, but also small marzipan ones balloons. To obtain such a martsepan, they take a piece of martsepan dough and roll a ball in their hands, then fold these balls in the same way as a mazurek, on a sheet covered with waxed paper, lubricated with Provence oil, and bake in a light oven; when the marcepans turn red and dry, they are ready.

From the book: Pelageya Aleksandrova-Ignatieva. Practical foundations of culinary art. – M.: AST: Corpus, 2013. – Based on the edition of 1909.