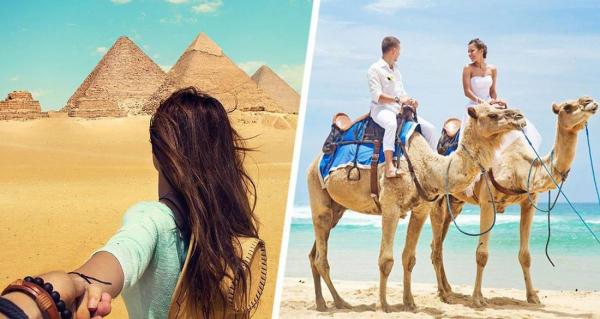 Work is not a wolf, it will not run away into the forest: from April 24, a series of Muslim and Christian holidays and weekends begins in hot Egypt. This fact, according to a Russian woman living in the country of pyramids, is incredibly happy with the locals. On the Yandex.Zen channel, she noted that Egypt is a wild mixture of traditions and cultures and shared interesting details about the upcoming weekend, which partially coincides with the May holidays.

“The Egyptians are, to put it mildly, not the most hardworking nation (this is speaking in general. And in particular, here, as elsewhere, there are both loafers and workaholics), the blogger noted.
The long weekend will begin with Orthodox Easter, which “fell” this year on Sunday, April 24th. The locals are especially happy about this event, since in Egypt Friday is considered a day off, and for some it is Saturday, and Sunday is the first working day. Despite the fact that the country of the pyramids is mostly Muslim, however, Orthodox holidays are fixed here at the state level, so state organizations do not work at this time.

This is how the author described this time: “On the streets in non-resort Egypt At this time, you can see real mass celebrations. And not only Christians walk, but everyone, everything, everything. Once my mother came to Alexandria for Easter and was shocked by the number of people on the streets. She then said: “I would never have thought that in Muslim Egypt Easter is celebrated more than in predominantly Christian (Orthodox) Russia.”

At the same time, the author clarified that the Egyptians do not celebrate Catholic Easter, which this year was last weekend. The exception was hotels that accept European tourists.

The next day, April 25, the Egyptians will also have to rest. The public holiday of Sham En-Nesim will come, i.е. “smell of the wind” The holiday is very ancient: the Egyptians began to celebrate it in the third millennium BC, then it meant the day of the spring equinox. This is a common holiday for Orthodox and Muslims.
“At this time, they again eat colored eggs, as well as onions, eggs and salted fish “with a smell” – fisih (whoever felt this amber at least once will never forget, I give a tooth). Usually this time is spent with the family, they often go on picnics,” the blogger said.

Then the locals are waiting for several working days, and after them the holiday week will come again, which will almost coincide with our May holidays. Egypt will celebrate one of the most important Egyptian Islamic holidays – Aid el Fitr, which will mark the end of fasting in the month of Ramadan.

“The last working day is April 28th. Then – Friday, and the long weekend begins – from April 30 to May 5. May 6 is Friday again, so they will go to work on May 7 at best,” the Russian woman wrote.

The next big religious holiday is Aid el Adha (in our opinion, Kurban Bayram, or “the day when slaughter sheep”), will be in a couple of months.

What can tourists expect?

Egypt will go “in a big way”, because along with Islamic religious events in recent years, all important Christian dates and some memorable events in history have been celebrated in the country.

“In general, the attitude towards holidays in Egypt is quite interesting. Most of them are religious (both Muslim and Christian). At the same time, they celebrate ancient pagan holidays (Sham En-Nesim), and some memorable historical dates, and even purely Western holidays (New Year, February 14),” she added.
Russians need to take into account important information when planning a vacation for the May holidays: after Ramadan, a large “Egyptian invasion” is expected for 7-10 days at all resorts, so most foreigners do not like to relax in Egypt at this time, the blogger noted.

In addition, she told an interesting fact: in Egypt, not everyone celebrates birthdays. Some may not even remember when their parents or next of kin were born.

For those who care about a healthy lifestyle, we recommend reading: “Scientists have learned to destroy cancer with sound.”