A long time ago, my father gave me a red Swiss Army knife. Many years have passed since then, and it still serves me almost every day and is in excellent technical condition. Then I realized that the Swiss Army knife is synonymous with the word “reliability”. If you use it normally, then a knife will last without exaggeration for life.

Let's go to the knife shop on the main street of Zurich to find out what models are sold in Switzerland itself.

The two most popular Swiss knife brands are Wenger and Victorinox. Everything else is either very rare or not exported from Switzerland at all. But these two companies offer knives for about the same price and are not inferior in quality.

In Zurich, I went to the Victorinox store to look assortment.

Variety is immediately apparent. Victorinox has long been not only folding knives, but also watches, suitcases, backpacks and even perfumes. There are no complaints about the quality, but it all costs much less than the original Swiss brands specializing in watches, suitcases or perfumes.

But let's get back to knives…

The simplest knife costs 30-40 francs (about 2000 rubles). In addition to the main blade, there is a bottle opener, a corkscrew, an awl and a can opener. The set is small, but everything you need is there.

This is the base price for a base knife. Further, a whole bunch of variations are possible that increase the cost of the goods.

For example, such a knife is already worth 129 francs, that is, 8,000 rubles. But here it comes with a bigger blade and a wood file, plus it's a fashion limited edition in black.

Who likes not just knives, but folding monsters with a couple of dozen functions, pay attention to this thing: 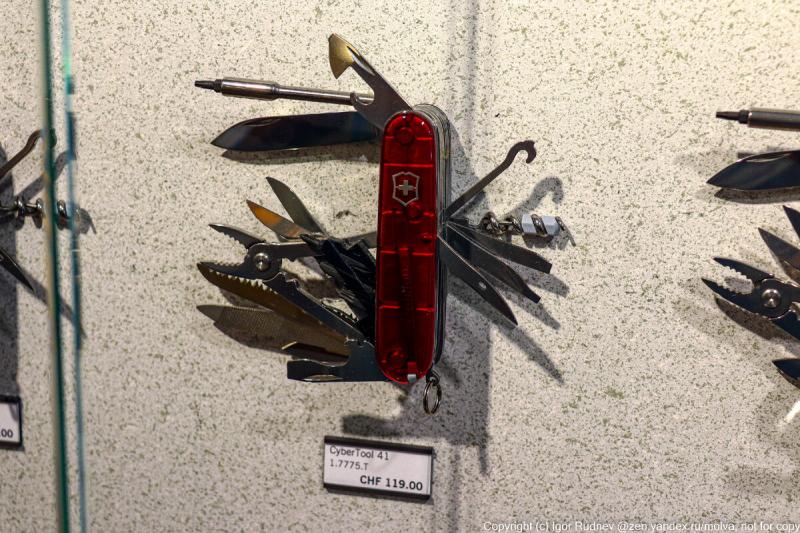 It costs even less than the previous model, but the number of openers, scissors, nail files and hooks cannot be counted. As for me, it would be simply inconvenient to use such a bandura because of the abundance of unnecessary tools, then everyone decides for himself.

By the way, Victorinox produces not only penknives. There are sets of kitchen and table knives, as well as cutting boards, magnetic tapes and stands for them. In general, they capture the market to the maximum.

They have good quality suitcases too. I just needed a suitcase, and if it were not for the price of 400 francs, I would have taken it without thinking. And so I had to think and find something cheaper…

I wrote about the prices of Swiss watches here: there you won't get off with a couple of thousand rubles