Surely, many are already preparing for the new summer season, growing seedlings on the windowsills under pink lamps and doing their best to ensure that their harvest next summer is above all expectations. And in Armenia, no pink lamps are needed. All sorts of crops grow in the gardens anyway, and the only concern of people is to water all this splendor abundantly during the hot summer.

Grapes in Armenia grow on the backyard of every first family. Many do not even collect it, but simply use it as a natural hedge or to create shade in the patio. But if you devote at least a little time to the grapes, then under the Armenian sun it will ripen perfectly.

The photo was taken in October, so this grape has almost turned into a raisin turn out to be very ugly. Wine critics even sometimes compare Armenian Areni with Pinot Noir for the refinement of the aroma shades.

But besides grapes, more prosaic crops are also cultivated in Armenia:

Zucchini, eggplant, carrots and cabbage are all also grown in Armenia, only few people can be surprised with white cabbage. Except perhaps eggplants, which are problematic to grow in our latitudes due to the cool climate. But in Armenia, they have expanse: it’s not for nothing that eggplants are added to many dishes of the national cuisine of the Caucasian countries, for example, to ajapsandal. 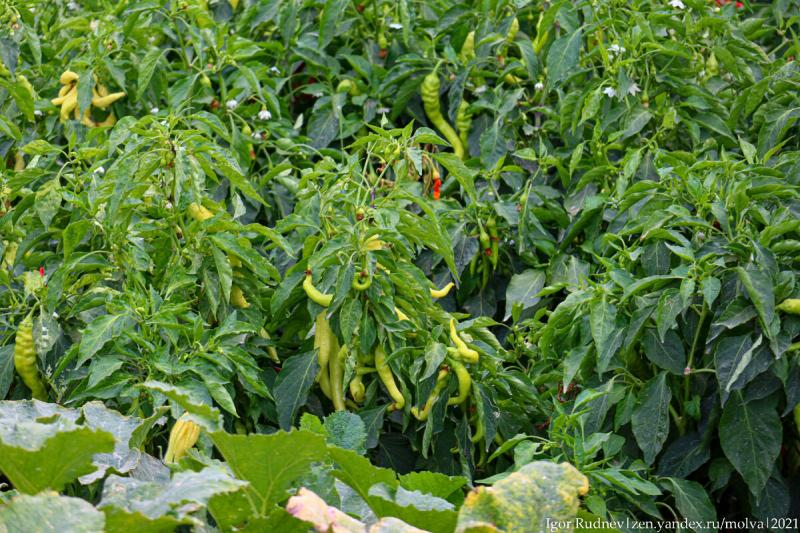 Even in Armenian gardens you can find such peppers. Nobody eats them raw. Most often, they are poured with marinade and left in plastic one and a half liter bottles. In this form, they are then often sold in the markets and just along the highway, much like mushrooms are sold here at the end of summer and autumn.

And, of course, fruits: without them, Armenia would not be Armenia. Quinces, peaches, apricots, apples… what else do they grow. And again, human intervention is minimal: the maximum will need to be watered on the tree so that it does not dry out in July. But then for several months it will be possible to eat fresh fruit, and most likely there will be enough to put up for sale.

Would you like a garden like in Armenia? Or is it in your country house that everything grows about the same?